We are back in Seattle after an amazing two weeks in Utah shooting Brown’s Canyon. This has been one of my favorite shoots – a great cast whom I’ve worked with for months, and a super-talented crew of nine, all working and living together in one house.

Brown’s Canyon is a film I’ve been developing since last summer with the actors Lisa Every, Jenn Ruzumna, Carter Rodriquez, Eric Jordan and Sara Thiessen. Lisa and Jenn are also producing with their company BASH Theatre. Like we did for Phoebe’s Father, we spent several months together improvising the relationships and backstory of the characters. From that work, I wrote a shooting script in January, and on February 20 we started shooting. It is a super fast timeline, but because the actors and I have been in this together for a while, there’s a lot we know about the characters and the story. Our steadfast and talented crew  worked together seamlessly, and had a lot of fun too, judging by the laughter in the kitchen late into the night. Ryan McMackin brought creative and fluid camera work to the story, hand-holding the camera and using minimal lighting. Connie Villines, as producer and sometimes assistant director, kept us moving and on track. Gary Wortman, Lisa Every’s brother-in-law, brought his many talents to the set as assistant director, one-man art department and even snow-plow driver! Jo Ardinger was invaluable with eyes on the monitor as both script supervisor and editor.  Matt Sheldon gave us his sharp ears, Coburn Erskine kept a steady hand on assistant camera duties, Justin Salva’s infectious energy was always lurking in the grip/electric department, and Shalyse Lopez worked her magic with the actors’ makeup.  Tania Kupczak production designed the film, and Ron Leamon designed our costumes, though they stayed in Seattle to attend to other commitments.

Shooting at one location is a great match for this kind of character-driven movie. We were all able to focus clearly on the most important elements – acting, story, and shooting – without a lot of the logistical time that often comes with a movie shoot. We’ll be editing the film through the summer – I can’t wait to see what we did!

This fall, I’ve been working with actors Lisa Every, Jenn Ruzumna, Carter Rodriquez, Sara Rucker Thiessen and Eric Jordan to develop the story of a new film through improvisation, just like we did with Phoebe’s Father. The kinds of movies I love, and love to make, are about believable characters in familiar conflicts – a friendship dissolving, a family rift, a breach of trust. They capture something truthful about our struggles in everyday life.

How can we best tell these kinds of stories? I believe that working with actors early on is one very good way. Taking inspiration from Mike Leigh (whose movie Secrets and Lies I adore), the Brown’s Canyon actors and I are building the characters lives over time. We start on an individual level – every actor creates the details of their character (their family members, friends, childhood memories, favorite objects, talents, schooling, etc). Then, we put the characters together, in situation after situation, being very specific about when and where we are in their individual lives. Each improvisation builds upon the last. It’s extremely exciting – the story evolves in front of us, and we have no idea what’s going to happen next! It can be confusing and complicated, too – for the actors, to be clear about whether it’s the character or the actor making choices; and for me as director and writer, to observe and listen and choose when to make an adjustment and when to push the action forward.

Typically, a movie is written and rewritten many times by a screenwriter, often with producer and director input, long before the actors come on board. With this improvisation process, we try to uncover a deep understanding of the characters before scripting. There are loves, lies, jealousies, and secrets. When Jenn, Sara, Carter, Eric and Lisa come on set to shoot the film, they will know better than anyone how their character thinks and behaves. If we’ve done our work well, we’ll make a movie that is as believable and as real as can be, a story that moves and entertains while being true to life.

(Above, Carter Rodriquez and Jenn Ruzumna in an improvisation) 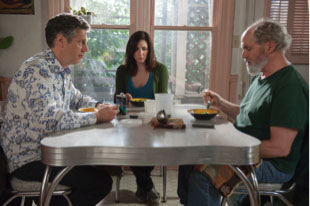 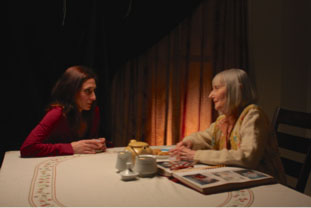